According to the latest CSO figures Irish inward migration is up just over 14% in the last year, less people are emigrating and a higher number of job seekers have come to the Emerald Isle.

So why is this little island such a popular choice, and no it’s not just the Guinness!

Therese Walsh, a Senior Recruitment Consultant with Allen Recruitment Consultancy, reckons Ireland’s recent surge in multinational IT companies may also be a pulling factor for anyone thinking about relocating to Ireland. “we have some fantastic multinational HQ’s set up across Ireland, not only in Dublin but Cork and Galway too! The job market is kicking off again with some great organisations placing a huge focus on language roles.”

Therese has herself placed candidates from other countries into their dream jobs in Ireland whilst working with Allen Recruitment. Although it is a considerable process it doesn’t have to be a daunting or drawn out one. Just follow the 4 W’s, for the Why, Where, What and When in relocating to Ireland….

Really the question should be WHY NOT? For a small little nation, Ireland is home to over 1000 multinational companies, such as Google, Microsoft, Apple, HP, IBM, Facebook, LinkedIn, Twitter, Symantec and Intel to name literally just a few!

To top that off, the latest CSO figures highlight an influx of new jobs in Ireland. 65,000 new jobs were created in Ireland over the last year, 2 million people are currently in employment and the Irish jobless rate is the lowest it’s been since 2008! 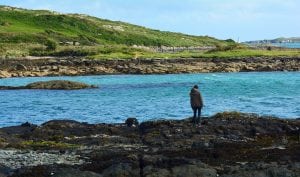 With scenes like this, what are you waiting for?

What do I need?

Therese hasn’t become one of Allen Recruitments best recruiters by just luck, no, Therese is a planning and checklist pro! So, it’s no surprise that she believes a checklist in hand is important before relocating to Ireland.

“Firstly, you need to check if you’re eligible to work in Ireland. You can find out more here.”

“Secondly, and possibly more importantly, you need to make sure that a move is the right thing for you now. This is especially true if you have family that might make the move with you. Will your family move with you? Are your children in school, will they have exams? Does your partner have a job that they may need to leave? Having answers to some of these questions will make the move easier. Finances also need to be considered. If you’re moving for a job you might want to check if there is a relocation package, if not you’ll need to make sure that you have enough to survive the first month and this can be tough at times!”

Where can I live?

The rumors are true, Dublin is a little bit pricey, but you just need to know where to look and also remember Dublin isn’t the only city in Ireland.

Speaking from experience Therese says, “Dublin, can be considerably more expensive than Athlone! I myself live outside Dublin and commute as it’s cheaper for a bigger place to live so it’s always good to consider outside the city centre for some jobs.”

“Other options may even be house sharing with other like-minded people, even if it’s just temporarily.”

What’s the best job for me?

With the rise in jobs over the last number of years in Ireland, the best job for you is really an individual choice. What are your skills, qualifications? Where do you see yourself working?

Therese states that Ireland is full of both contract and permanent jobs, “you’ll find that there are some opportunities for contract or temporary roles here and while you might think that’s a big risk (and it can be!), it can be a great way to step into the multinational roles and companies that Ireland can offer.”

You may also feel like an outsider moving to the Irish world of work, but you are already on the wanted radar of many multinational companies. “While being fluent in another language is definitely an advantage, to be successful, you will need a strong level of spoken and written English. Those with skills in the technology, finance, and HR areas are in high demand.”

Travelling to Ireland is a big move, but having a job sourced before you make the move will make the transition so much simpler.  So, this is where we can come to your service..

“Recruitment agencies (like ourselves!) can be a great resource for you so register as soon as you can to increase your chances of success.”

“Allen Recruitment are always willing to advise and help to the best that we can, from sending you tax calculators to going through your checklist before you make the move so register today to find out all about our multilingual roles in some fantastic new roles!”, Therese added.