It will never demand a wage increase, request health insurance or even call in sick on a Monday morning, so is it any wonder automation is becoming the future workforce.

Bill Gates and Barack Obama have both sent out warnings about the pace in which automation is taking over jobs, with Bill Gates proposing a tax on robots. Likewise, this warning has since been coupled with the statistics from PwC latest study, claiming millions of jobs are at risk across Europe and the US as a result of automation.

The report stated that around 30% of jobs in the UK could become automated with these changes occurring over the next 15 years.

A further study, published this month by tech provider Ricoh highlighted one in five Irish people are concerned their jobs may be at risk with automation and technology.

Robots and automation are best suited to routine sequenced jobs. Roberto Unger, a Harvard professor of Law once said, “No one should have to do work that could be done by a machine”, but can the alternative go too far? 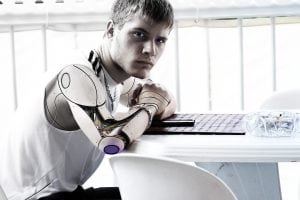 Surgical robots are also on the rise, after they were first launched in 2000 and have since conducted a number of procedures such as knee and hip replacements.

Not so obvious sectors are also being hit by the automation stick, like Pharmacists, with UCSF Medical Center in San Francisco already using medicine dispensing robots across a number of stores.

Writers and Drivers are also in jeopardy, with report writing software being exercised by a number of US companies and self-drive cars leading the way for the future.

The continuing advances in global technology shows no signs of halting, meaning the robot epidemic is upon us!!

Nevertheless, before we get to a head of ourselves, this isn’t some haunting Sci-fi movie featuring Will Smith, it’s the real world where creativity and critical thinking can never be mastered by a machine.

Furthermore, we live in a society where technology has more often than not been a great benefit to our lives, assisting our education, health and lifestyle.

A recent study by Deloitte highlights the benefits of the automation revolution, and that we can expect a number of new jobs to be created with the technology advances.

For example, a number of jobs have been solely created as a result of technology and the Internet. In fact, I wouldn’t be writing this blog without the rise of technology in the last 25 years, without the world wide web my job would actually ceases to exist!

Ultimately, the rise of robots will eliminate routine and tedious jobs and will pave the way for innovative, thought-provoking work (lets stay positive).

So, how do we prepare our human selves for the impending change, be imaginative, creative and characteristic. Three core values a robot can never possess.